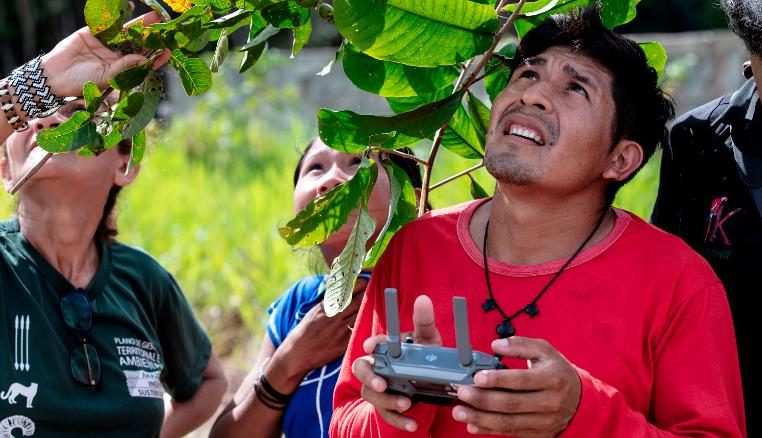 Wau Wau (28) is one of some 250-odd members of a tribe called Uru-Eu-Wau-Wau, who have until recently been forced to watch helplessly as their home – a densely green 7,000 square mile of the Amazon forest habitat deep in Rondonia State in Northern Brazil – dwindles under the smouldering hand of illegal loggers and land grabbers who burn the forest and cut down trees for their economic value and also the fertile virginity the land provides.

“Nature is everything to us,” Awapy recently told CNN. “It is our life, our lungs, our hearts. We don’t want to see the jungle chopped down. If you chop it all down, it will definitely be hotter, and there won’t be a river, or hunting, or pure air for us.”

Which is why, in their small way, the Uru-Eu-Wau-Wau have decided to fight back. With the help of the World Wildlife Fund (WWF) and a local non-government organisation, the Kaninde Environmental Defence Association, Awapy and a select group of Amazon natives are using drone technology to try and scare away people illegally burning away their forest for crop farming and ranching; or at least get them to account for their crimes before the courts.

Awapy, his colleagues and fellow forest defenders, who comprise eighteen organisations in the area, started training with drones last December; getting lessons in how to fly the drones, and collect data using aerial image capturing and mapping software and hardware fitted on the drones they fly.

The nineteen drones donated to the eighteen organisations involved in forest protection help them cover large areas of forest which would otherwise take them way more time had they been doing it on foot. And it would be dangerous to their lives too; as physical encounters with the very people whose crimes they are trying to expose are likely to end in bloodshed.

Awapy says he has received death threats for his work protecting the forest, but the will to protect the forest for future generations keeps him focussed.

“I like what I do, especially defending the jungle, because I grew up in it and I still live here. That’s why I defend it, for those who died defending our territory, who have passed on. I want to keep fighting for their sake.”

Once every month, Awapy leads a team of a dozen patrol men and women who, on their very first drone patrol, espied a piece of land roughly 1.4 hectares which had been stripped bare of forest cover. The forest protectors’ job is to gather such evidence and then forward it to authorities who will act from an informed point of view. Thus far, the WWF reports that the National Indian Foundation (FUNAI) – the Brazilian government body responsible for managing policies relating to indigenous people – has been able to use geographical coordinates provided by the Uru-Eu-Wau-Wau to investigate illegal logging in the region.

As far as Felipe Spina Avino, the senior conservation analyst for WWF-Brazil is concerned, the teams are enjoying their job despite the dangers involved, and they have clearly fallen in love with their newly acquired eyes in the sky, if only for the reason that the drones give them the unique opportunity to view the splendour of the Amazon forest from high above. Spina Avino extolled the powerful virtue of combining drone technology with the natural topographical knowledge the locals have, which has helped pinpoint the areas most in need of conservation.

Rondonia was one of the states worst affected by last year’s fires, and just this past May, the defence ministry confirmed that President Jair Bolsonaro had to deploy troops to stop illegal logging and other criminal activities that could damage the rainforest.

Similar efforts to protect and restore lost forests are underway in Madagascar, which has lost nearly 90 percent of its original rainforest to slash and burn agriculture. Government and non-government efforts at reforestation have recently recently turned to drones, which are being used to plant millions of trees.

SA Drone Council: "Let's make history; lest we be history."