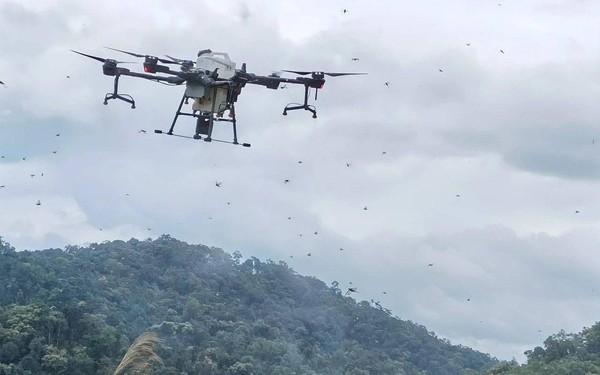 A massive drone spraying operation has been in progress in the South Western province of Yunnan, China, where an army of yellow bamboo locusts has invaded.

Usually feeding on bamboo leaves, the yellow bamboo locusts are said to have originated in Laos where they have been breeding, and have now spread into China. Local media reports have it that the swarm has already stripped 8,000 hectares of greenery, including rice fields, bare – with ore locusts expected to land in the coming weeks.

Authorities in the province have unleashed a counter army of drones and ducks to feed on the locusts; each duck is said to be good for feeding about 200 locusts each day, and they also are friendly to the local ecosystem.

From the air, the local Pu’er City Forestry and Grassland Bureau and Yunnan Senye Aviation cooperated to dispatch fifteen DJI T-series plant protection drones and 20 operators to spray and kill locusts. The assault has been working well, to the effect that half the hectarage has so far been reclaimed from the locusts.

Drones have been the most efficient of all measures taken, as each drone has been spraying more than 1,000 acres of farmland every day. They have been deployed every day since July 9, after the local government saw the physical evidence of how good and effective drones have been in this fight.

According to the Pu’er Forestry Bureau, the provincial and local governments have allocated some $1,3million towards managing the locust plague. Official figures show 36 tonnes of insecticide, 1,690 crop-dusting flights and 28,974 people have been procured for the job, which is expected to last until September.

The forestry and grassland office said the fight against the locust swarms was so far effective but needed to be maintained in order to prevent major economic losses.

Yunnan is a province in southwestern China with a varied landscape encompassing snow-capped mountains, rice terraces, lakes and deep gorges.

On our way: Zipline’s quest to be the medical drone logistics company of choice

A Cadillac passenger drone? It could happen

Sony flies into the drone space with the Airpeak

One last kick in the teeth for DJI from 2020