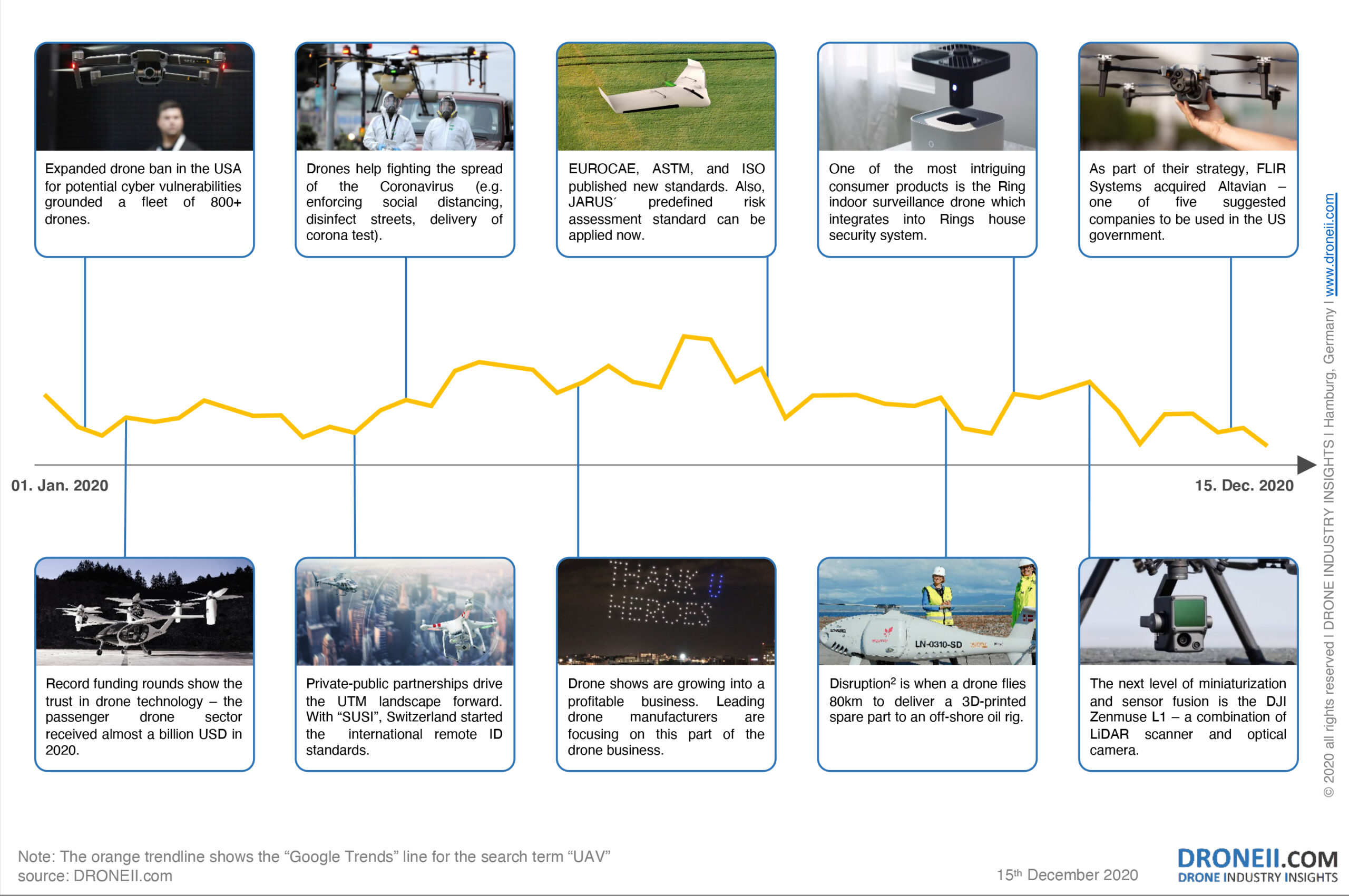 It has been a bit challenging as a year, hasn’t it? What with the global pandemic that sneaked upon humanity and set all its plans for the year awry. Correspondingly, the pandemic meant reduced business for a lot of industries, including the drone economy. According to Drone Industry Insights, drone sales went down as demand plummeted to 43 percent.

But that was for new business; the Coronavirus pandemic really proved to be the catalyst for the rise of delivery drones, as lockdown protocols by authorities the world over meant somebody had to stay out to deliver medicines, parcels and other important implements during the stay-in.

Which was why medical drone logistics company, Zipline stayed at the top of rankings in the delivery drone space on DII’s rankings. Having consolidated its influence in Rwanda and Ghana, Zipline broke onto the American logistics market when it partnered with Walmart to start trial medicine deliveries for the retailer’s clients in Arkansas.

As for Africa, the year started on a promising note, with the opening of the African drone and Data Academy in Lilongwe, Malawi – the first ever drone school in Africa to teach students about drone technology. The academy short- and long-term courses on various drone technology subjects like drone building, engineering, piloting, data analysis and drone applications in various industries.

The academy has already seen two batches of students from around the continent leave as graduates.

“Humanitarian and development programme delivery in Africa and beyond can benefit significantly from the application of drone technology,” said UNICEF Executive Director Henrietta Fore at the opening. “The African Drone and Data Academy will be instrumental in equipping young people with the skills they need to use the technology to benefit children and their communities.”

The African Drone Forum – held in Rwanda in February – was also another important milestone on the African Drone calendar this year. It featured the coming together of stakeholders which world bodies like the World Bank, aviation authorities from all over the continent, drone technology start-ups and technology partners; to brainstorm on the challenges and opportunities of unmanned aerial vehicles in Africa. The forum’s sidelines saw delivery drone start-ups parading their products’ skills in the Lake Kivu Challenge.

Then a virus sprung upon us, and the world took a collective kneejerk.

We all know what role drones played in that period; which is why we will start by looking at the impact of drone technology on the year 2020.

Drones actively supported to curb the spread of the coronavirus. A very direct way was the use of spraying drones disinfecting highly populated places in cities. On top of that, drones were used to enforce quarantine/social distancing via inbuilt speakers.

In 2020, we saw flying kidneys, blood donations, tissue samples, and a lot of urgent medication – also delivered on the last mile. The technology proved capable, the regulators proved to be permissive and the citizens proved to be open-minded.

All this helped accelerate the global roll-out of drone delivery and will help facilitating game-changing logistics in the near future.

Romeo has left the building

In news that was so 2020, DJI’s Senior Director for Public Safety, Romeo Durscher announced that he will be leaving the organisation he has been representing all over the world for the past six years. Romeo has been an evangelist for humanitarian drones, sharing his experiences on how drones can be used for good at drone technology events all over the world.

He presented papers at 96 conferences; and in the USA, he helped the fire-fighting efforts in California, as well as oversee DJI’s contribution to the fight against coronavirus in many states.

Adios, Romeo. The drone world was lucky to have you. Although, we do pray you have not left the industry entirely, and will back in the new year after a deserved rest.

Legislative recognition of drones has chugged along slowly in the year, with Kenya and Ethiopia being the latest countries to put drone regulation on paper. The African drone Forum also set up a task force to liaise with African aviation authorities so they can work on standardising drone laws across the continent.

In general, it can be said that most countries have established a solid regulatory framework for drones. However, interpreting and ensuring compliance with these rules is a challenge for companies using drones.

New standards representing an “applicable means of compliance” were introduced this year to help overcome these hurdles. Standardisation bodies like ASTM, EUROCAE and ISO should be mentioned in this context, which published both technical and procedural standards.

The SESAR JARUS organisation established a standard for the assessment of operational risks, which has also been integrated into the EU drone regulatory framework. Based on this standard, drone company DELAIR was the first European drone company to perform BVLOS flight under a “Predefined Risk Assessment” standard (PDRA).

DJI’s woes with the US federal government

Started in 2017 and extremely controversial, drones from Chinese manufacturers were banned from government departments like the DoD on allegations of espionage capabilities.

In January of this year, the U.S. Interior Department grounded its entire fleet of more than 800 drones based on the fact that most if not all of the drones contained Chinese-owned components. The drone gag had a severe impact on the department’s fire fighting efforts when the fire season started, as – although they did not ground fire-fighting drones – authorities could not purchase additional drones to help the ones already on the ground.

To continue using drones, the DUI (Defence Innovation Unit) suggested five alternative manufacturers that fit the profile for government use. Whether the Chinese drone ban will be lifted completely or to a certain degree in 2021 under the incoming Biden administration is unknown at this point.

No such drastic action as a mega gag has happened in Africa yet; but it was revealed during the just ended Drones and Unmanned Aviation Conference that the South African government could not find common ground with Zipline, so the latter could introduce its medical delivery drones onto the South African landscape. As we write, the country is experiencing a second wave of COVID-19; and the Zipline drones could have helped move equipment faster.

They, as did the Zimbabwean government, did make moves to purchase border surveillance drones to keep maintain law and order along their respective national boundaries.

This December saw the merger between Delta drone South Africa and ParaZero Drone Safety Systems finally going through, following its announcement in March.

On the whole, despite all the turbulences this year, the trust in the drone market continues to grow. Another record year in terms of Venture Capital investments and programs proofed that unmanned technology is making an impact and – most notably – is here to stay.

At this juncture, we wonder whether it would be too much to ask for investors to check out a medical drone delivery start-up called AerialMetric, the only drone manufacturing company based in Africa. AerialMetric makes drones that deliver medicines across rural Madagascar, and they recently became the technology partner of WeRobotics, a humanitarian robotics organisation, so they can share their expertise with the latter’s network of Flying Labs dotted around the Global South.

The US drone maker Altavian was acquired by thermal camera giant FLIR Systems in December 2020 for an undisclosed amount. Altavian is one of the five drone manufacturers approved by the U.S. Department of Defence under the Blue sUAS program to sell to the U.S. military and federal agencies.

Now, with the acquisition of Altavian and in times of a ban on Chinese drone products, FLIR becomes a very powerful player with access to the US government.

The most intriguing consumer product for indoor surveillance

Drone surveillance is nothing new. However, it is new for consumers and it is very new indoors! Amazons subsidiary Ring – known for their connected house solutions, like video doorbells – announced in October that it will offer a flying indoor security drone in 2021.

Users will be able to program the system to make frequent checks or control it manually. It will have night vision for poor light conditions and will fully integrate with Ring’s existing security systems like door alarms.

The proof is in the pudding and we’re excited to see how this platform will perform under real-life conditions next year.

Today, multi-sensor payloads are quite common to the commercial drone market (like E/O+IR sensors) but combining a LiDAR scanner and an optical camera in a very small and very light payload is a remarkable step forward. In October this year DJI presented the Zenmuse L1 sensor for their Matrice and Terra platform. It includes a Livox LiDAR module, a high-precision IMU, and a camera with a 1-inch CMOS on a three-axis stabilized gimbal.

The L1 forms solution that provides 3D data in real-time while capturing the details of complex structures. The miniaturization of technology seems endless, and it will bring us exciting new technology solutions – just like this one – in the years to come.

In September this year, a drone was used to transport a 3D-printed spare part to an off-shore oil rig in Norway. Equinor reported, that in a one-hour flight from Mongstad base to the Troll A platform in the North Sea, an additively manufactured spare part (a diesel nozzle holder) was delivered by a Camcopter S-100 drone this September.

What’s amazing about this incident? A spare part that is no longer manufactured was replicated, transported along a very dangerous shipping route, at a substantially small ecological footprint, and at a very high speed. This is a true game-changer not just in terms of provision and logistics but also for sustainability and speed.

UTM software companies have fought for their clients for many years now. The lack of drone space regulation was the main reasons that made it difficult for them to have market access. In 2020 however, many National Aviation Authorities (like the Australian CASA, US FAA, Poland ULC and Singapore CAAS) have partnered with private UTM companies to improve this situation.

A highlight in this context is Switzerland which has a very advanced solution for future UAM traffic management. Back in December 2018, the country launched the SUSI program (Swiss U-Space Implementation), a public-private partnership between Switzerland FOCA, the Swiss Air Navigation Provider Skyguide and a couple of other relevant market players/stakeholders.

A master agreement with all involved parties allowed to start a nation-wide implementation of an International Remote ID standard on September 21st of this year.

Like every year, this year will start and end with fireworks. The thirst for entertainment is high – especially in times of a pandemic and social restrictions. We saw a lot of activity in the drone show sector that offers a sustainable, quiet and creative alternative to fireworks.

Aside from Korea celebrating its frontline health workers with a drone show tribute, we saw 104 Drones touring with Celine Dion, a new Guinness Book world record with 3051 drones in China and salutes to frontline COVID-19 workers. Drone entertainment is clearly growing into a profitable business, so that leading drone manufacturers are increasingly focusing on this part of the drone business.

Scared to enter the sewer? Roll in the caged drone!

Sony flies into the drone space with the Airpeak