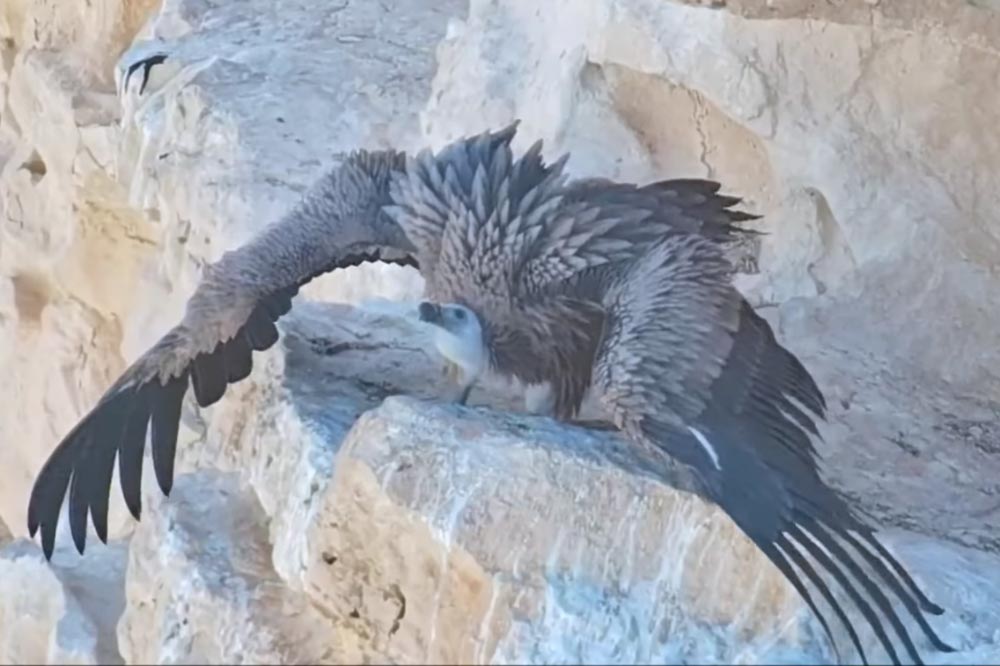 Here is something you don’t get to read every day: A drone has drone in Israel has been helping to feed an orphaned baby vulture that had been on the verge of starvation after losing it mother.

Born on March 12 this year, the vulture had been growing well, getting nourishment from its parents, until disaster struck on June 4 when the mother – on one of its foragings – collided with power lines and died.

This would have spelt doom for the little bird of prey as — at this late stage of development — food from one parent would simply not have been enough to keep the hatchling well fed.

Upon learning of this tragedy, conservationists intervened. They settled on trying to use a drone keep the food supply at a maximum, dropping its share near the nest to supplement to the potion brought in by the father. It was a fumbling exercise at first, as the conservationists were not sure how the chick would take to food being dropped by a stranger who looked nothing like its mother.

But was to their relief that the baby vulture was not choosy about its breadwinner, as it happily gorged on the food offered by the drone. With the chick’s father also still providing food on a regular basis, the youngster was able to gain enough nourishment to continue to grow and gain strength.

And, on July 26 – after 136 days of fledging – Israel’s new-found celebrity successfully left its nest in full view of the camera that had monitored its growth, giving a boost to the region’s relatively small population of vultures.

Vulture populations have become endangered worldwide, and their demise might spell disaster for humans, as  the decline of vulture populations can lead to increased disease transmission and resource damage, through unchecked growth of disease vector and pest animal populations that scavenge carcasses opportunistically. Vultures control these pests and disease vectors indirectly through competition for carcasses.

In June last year, 537 vulture corpses were discovered in Botswana, suspected to have died after feeding on elephant carcasses that had been poisoned by poachers. Poachers would sooner there were no vultures in the world at all, as they help alert animal conservation authorities of poaching activities by circling above dead animals as they wait their turn to feed.

Zambian drone hackathon qualifiers to be announced this week