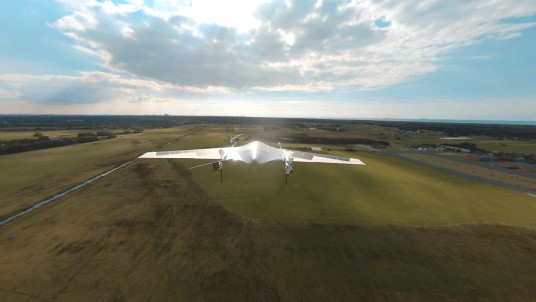 We knew it was just a matter of time, but we now have a Dutch drone that flies solar.

Aviation and technology companies have been trying hard to harness solar energy to power their aerial systems – Boeing, Google, Facebook and BAE Systems launched, or tried to launch solar-powered autonomous aerial vehicles into the skies, with levels of success tottering between none and very little. Airbus’ Zephyr-S became the world record holder for a continuous unrefuelled flight when it stayed in the air for 26 straight days, carrying eleven pounds of communications equipment – but that was before September this year, when HAPSMobile and Loon (an Alphabet company) premiered their Sunglider; a much larger telecommunications equipment drone, which was designed to stay in the stratosphere for months on end without needing attention.

Now, Dutch fixed wing delivery drone maker has partnered with clean technology and solar energy systems start-up Wattlab to premier a drone flight powered by solar energy. Having successfully tested the drone recently, Avy are convinced that solar energy will be a permanent solution to environmentally friendly long-haul flights in the long term.

Its official – Avy wants their drones to fly as long as the sun shines.

The company’s fixed wing drones can already fly fully autonomous, as they also do with vertical take-off and landing (VTOL). Now, having been to Rwanda, where they won an award for the safety of their drone flights, the Avy team know their drone will fall in love with Africa the instant they get to spread their wings in its sunny skies.

They actually mentioned this fact in their statement announcing the success of their first solar flight.

The company is already dreaming of a future where – after witnessing the success of a solar-fitted wing in maintaining its aerodynamics without increasing weight – they can further lower the weight or even widen the wing areas while at it. Anything is possible at the moment, but what is certain is that more efficient solar cells will be tried next time; in a matter of months, actually.

The inaugural test involved the drone being fitted with Wattlab’s custom solar foil, to reflect and absorb more sunlight. But the partners believe the foil can be improved with more effective cells to generate more power, which they are planning to test in the coming months, along with the other lessons learned from their first pilot.

“Our goal at Avy is to accelerate the transition towards sustainable aviation,” said Patrique Zaman, founder of Avy. “By integrating solar cells into our wings, we make use of the cleanest energy available. The Avy drone has wings and is able to transport life-saving medicines (as well as emergency services and nature conservation) by air in Europe and Africa, as well as support first aid services in Europe. Our test flight in September with the solar prototype, showed promising results and was a first step towards a longer flight time.”

Wattlab founder, Bo Salet expressed hope that adding solar power to drone technology was a good step towards sustainability in the industry.

“The solar technology developed in this project is fully integrated into the wing shape and does not add any extra weight,” explained Salet. “The technology of the drone can serve as a stepping stone towards more sustainable developments in the aviation and transport sectors.”

Avy official: This is why drones are safe