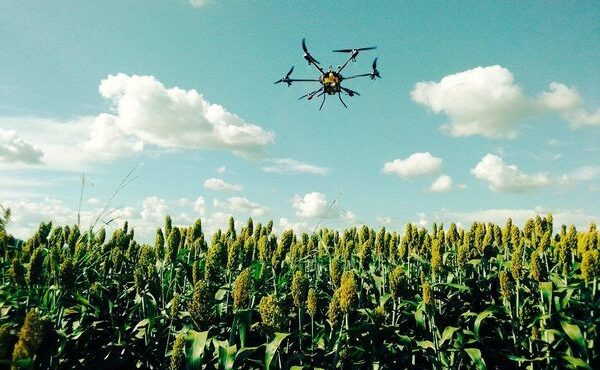 The last time they were out, the maize crop in Zimbabwe was just a green shoot feeling the sun’s warmth for the first time and barely a few centimetres above the ground yet.

So you can forgive the folks at Zimbabwean agricultural drone services company start-up, Alley Capital Group for being ecstatic just to be out there flying over the fields again and giving health to crops all over their country through their crop dusting drones.

Having spent much of its life in the quiet environs of a strict COVID19-induced national lockdown, Zimbabwe’s agricultural produce is now turning a ripening brown, in readiness for a countrywide bumper harvest that has eluded the country for a long time.

“We returned to the fields in February this year, when the national lockdown rules were finally relaxed,” said Piwai Chikasha, a founder member of Alley Capital Group. “Since then, we have been to Chiredzi (the lowveld farmlands south east of the country in Masvingo Province) to dust a sugarcane field; to Kadoma in Mashonaland West, where we dusted a thriving sorghum crop; and also, to many other parts of the country.”

It being a la nina year, the rains were so good for Southern Africa that Tugwi-Mukosi – the biggest inland dam in Zimbabwe whose construction the country finally completed last year and expected to take years to fill up – actually had to open its flood gates a few months after it was fully operational, for fear it would burst over the dam’s top.

Zimbabwe took this chance to get close to its agriculture targets and at least harvest enough to not rely on food imports for the foreseeable future. About 1,4 million hectares of agricultural land has been taken up by the summer maize crop this year, according to a report in The Herald, representing a 137 percent rise in the area planted, compared to the same period last year. The country has set a harvest target of 3,6 million tonnes of maize for this summer’s cropping season; a really ambitious target, since the country has consistently failed to scale one million tonnes of its annual staple crop in recent years, making it dependent on imports and donations.

Tobacco – affectionately referred to as the golden crop in the country, because of its rich financial returns – saw its hectarage increase by seven percent from 100 430ha last year to 107 254ha this season.

“In Kadoma, we took our mutltirotor drone to the sky to dust 120 hectares of a ripening sorghum crop that was suffering from a worm infestation,” said Chikasha whose drone has a flight time of around 20 minutes before it can be recharged again. “The job took us six days to complete, and the results were great; the offending worms dies within 24 hours of being sprayed.”

Alley Capital Group is part of a larger continental collective of young African agriculture entrepreneurs from across the continent who are looking to bring digital solutions to agricultural problems bedevilling their mother continent. Called Africa Goes Digital, the group was formed in 2018, with initial funding and technical expertise provided by the Technical Centre for Agricultural and Rural Cooperation ACP-EU (CTA).

The group has since outgrown the CTA’s aegis – whose support had to end in December last year following the end of the Cotonou Agreement – to form Africa Goes Digital Inc, which Chikasha says has been offering members with networking and technical advisory support, so they stay abreast of technology trends in the precision agriculture business.

And they should too; because their eventual weaning by CTA was on a proverbial high, with the group’s Eye in the Sky project winning a prize at the prestigious World Summit for the Information Society (WSIS) last year; for their novel approach of offering drone-based solutions to precision agriculture in Africa.

“The project caught the attention of young entrepreneurs who were selected via a competitive process, before they were trained and supported in offering drone-based services to farmers, organisations, agribusinesses, government, international development agencies and other parties,” said Giacomo Rambaldi, the then Programme Coordinator ICT4Ag at CTA.

“A June 2019 survey confirmed that the enterprises have been recruiting staff, investing in new equipment, increasing their turnover and client portfolio. Africa Goes Digital Inc will provide further support to the enterprises and enable members to share ideas, offer diverse services and be more competitive.”

Zim revenue collector to use drones to curb smuggling

Zim revenue collector to use drones to curb smuggling